Showing posts from October, 2013
Show all

A good year for astronauts in trouble- 'Gravity' review

October 07, 2013
I have seen this year's 'Life of Pi': 'Gravity'. Go see it. Go see it twice. It's not a complicated film at all (that, incidentally, is one of its strengths), but it is so beautiful, and effective, it deserves repeat viewings.

The comparison with 'Life of Pi' is not my own, alas, but it is very apt. Both films are about Man and Nature; there is no antagonist. No human one, in any case. I suppose you could point, in both films, to some action of someone offscreen that triggered the events, but that's not important. Both are stories of survival. Both are stories about the transcendent, beautiful, monstrous Great Out There, and of the little island of safety we've made for ourselves.

The result, in both the case of 'Life of Pi' as well as 'Gravity', are stunning visuals and visceral stories. There is not much to put in words. They are so simple to describe, it would do them a disservice. Watch 'Gravity' once if you're a …
2 comments
Read more 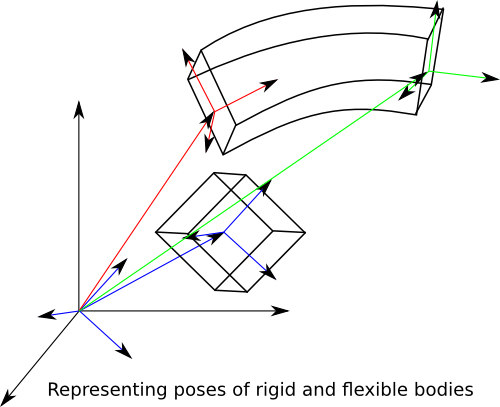 (Part two of a series on a seminar I attended at the International Center for Mechanical Sciences; part one is here.)

After the brief intro to Lie groups, we were shown applications of Lie group theoretic integrators to various problems in mechanics. It's easy to see how the theory applies to rigid bodies. The movements of a rigid body are just translations and rotations, and these are easily represented by a Lie group often referred to as SE(3), the semidirect product of SO(3) and R(3)."Semidirect product" refers to how elements in SE(3) combine, once given combination laws for its component groups. There's some ambiguity in the literature, actually, as some people call the direct product of R(3) and SO(3) (denoted R(3)xSO(3)) by the name SE(3).

The difference is, in a direct product elements from different group components do not mix. Example, suppose you have two elements in R(3)xSO(3), let them be (t1, R1) and (t2, R2). Then, the composite of the two element…
Post a Comment
Read more
More posts